On 6 April 2020, ECDHR along with 21 human rights organisations called on the Bahraini Government to release all political prisoners as the release of 1,486 prisoners on  17 March 2020 only included 394 prisoners sentenced on political charges. Most political opponents, activists, human rights defenders, and journalists remain incarcerated. Among them are influential members of Al Wefaq such as former secretary-general Hassan Mushaima, Sheikh Ali Salman, and Abdulwahab Hussain as well as human rights activists Abdulhadi Al Khawaja and Nabeel Rajab.

By participating with the hashtag on social media platforms, ECDHR continues the pressure on the Bahraini government because the situation in prisons has worsened dramatically since the outbreak of COVID-19.

In particular, prisoners are denied to make phone calls and all visits have been suspended on February 25, supposedly to stop the spread of the virus. In this context, it must be highlighted that Bahraini prisons suffer from severe overcrowding, which, according to the last survey published in 2015, have an occupancy level of 110.2%.
Furthermore, no precautionary measures were implemented to prevent the spread of the virus, which increases the risk of being contaminated. This, along with poor medical services in prisons, could have disastrous consequences. 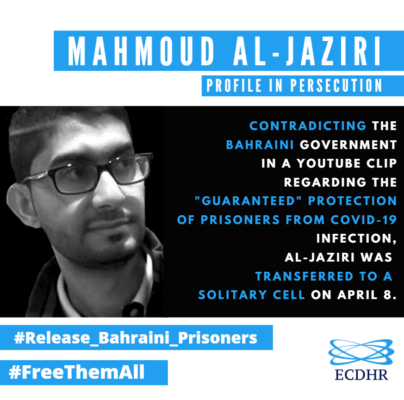 Mahmoud al-Jaziri, a former Al-Wasat journalist, is a compelling example of a prisoner of conscience. Arrested in December 2015, he was framed to be part of the Shiite party, Al-Wafa, planning to prepare attacks in cooperation with Hezbollah. His citizenship was revoked and sentenced to 15 years in prison for membership of a terrorist organization, he remains incarcerated in Jaw Prison, South of the capital Manama.

With the release of a YouTube clip in which he contradicts claims of the Bahraini government regarding the “guaranteed” protection from the pandemic virus in prisons, al-Jaziri was transferred to solitary confinement on April 8. So far, no measures have been taken to improve the medical and hygienic conditions in Bahrain’s prisons.

Apart from mistreatments, torture and religious discrimination, denial of medical care are common in Bahraini prisons. In continuation of social pressure to change the current exposure, ADHRB published a YouTube video with the hashtag #Release_Political_Prisoners_Bahrain to call on the Bahraini government to free all prisoners charged on political grounds at risk of Covid-19 infection. In this context, 67 Arab and international NGOs urged Bahraini authorities to take action on the High Commissioner’s call from March 25, 2020, to contain the outbreak by releasing political prisoners first and foremost.

Since 2014, 37 men were sentenced to death, including almost 23 individuals who have experienced torture, unfair trials, and charges on political grounds. 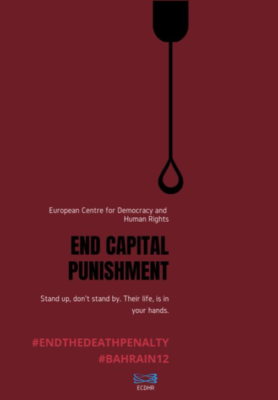 More recently, Bahrain carried out the execution of 3 men, including Mr. al-Malali, and Mr. al-Arab in July 2019. In the same year, another 5 men were sentenced to death: Husain Abdulla Marhoon, Moosa Abdulla Moosa Jafaar, Mohammad Radhi Abdulla Hassan, Ahmed Isa Ahmed Isa al-Malali and Ali Mohamed Hakeem al-Arab. Previously, 3 men were executed in 2017 and another 12 individuals were sentenced to death in 2018. Concerns from the international community have grown as Bahrain has not displayed any signs of halting this practice.

Bahrain’s actions violate several norms of national and international law along with Bahrain’s international human rights obligations, including the UN Convention Against Torture and Other Cruel, Inhuman or Degrading Treatment or Punishment (CAT), the International Covenant on Civil and Political Rights (ICCPR), the International Covenant on Economic, Social, and Cultural Rights (ICESCR) and the Arab Charter of Human Rights (ACHR). ECDHR, therefore, urges the Bahraini government to ensure prisoners are recipients of their basic rights, including that of medical treatment and psychiatric care. In addition, it is necessary to ensure that any criminal proceedings brought against these individuals or anyone else in the future are in conformity with international norms and standards, consistent with the right to a fair trial before an impartial and independent court or tribunal. In this sense, ECDHR also demands to commute capital sentences against individuals whose trials were marred by due process violations and allegations of torture and ensure the cases are re-tried in accordance with minimum standards set by international law. Regarding the practice of execution, ECDHR calls for a formal moratorium on capital punishment and immediately abolish the death penalty as well as to investigate the cases of individuals sentenced to death who have alleged suffering torture in detention by authorities, and prosecute all officials found to have tortured or otherwise inflicted ill-treatment.