No. 1|  Diseases in the Middle East and their cause of outbreaks

Past outbreaks in the Middle East

As of today, according to the WHO Regional Office for the Eastern Mediterranean, 20 countries, out of 22 countries in the Middle East, are affected by the COVID-19 virus and reported a total of 46,224 confirmed cases along with 2,808 total deaths in the Arabian Peninsula. However,  COVID-19 is not the first outbreak in the Gulf region: The first virus from the corona strain was detected in the form of the Middle East Respiratory Syndrome (MERS), also known as MERS-CoV, a virus that affected humans via contact with infected dromedary camels in the Eastern Mediterranean region. Detected in 2012 in Saudi Arabia, the WHO reported 2,495 confirmed cases of MERS with a global fatality rate of 34.4%; 37.1% in Saudi Arabia, by the end of November 2019.

By studying the past one can see that GCC member states have seen pandemics before: in the 6th century the Justinian plague spread through the Middle East, the Mediterranean, and Europe, followed by the Black Death in the 14th century. After that, the 19th and 20th centuries were marked by outbreaks of pandemic dimensions as not only the 3rd plague spread but also Cholera broke out. Lastly, HIV was discovered in the second half of the 20th century followed by SARS in 2003. The latter was seen as a wake-up call to improve containment measurements for diseases such as H1N1, Ebola and Zika.

Nevertheless, the Middle East has so far been particularly vulnerable to the vast spread of diseases because most of them erupt during conflicts or in the aftermath of wars. For instance, leishmaniasis breaking out in Syria, polio returning to Iraq after 14 years and cholera spreading in Yemen, are clear examples of such. More recently, the Persian Gulf struggled with dengue fever. Its outbreak is assumed to be a result of the recent Yemeni civil war. This, in turn, has caused alongside famine and water scarcity as well as energy, a national humanitarian crisis. The cause of the disease is believed to have arisen from the accumulation of rubbish heaps in the streets, which attracts the yellow fever mosquitos responsible for transmitting dengue fever. As declared by the Red Cross at the end of November 2019, 3,500 Yemeni people have ultimately been infected by the mosquito eggs in puddles. 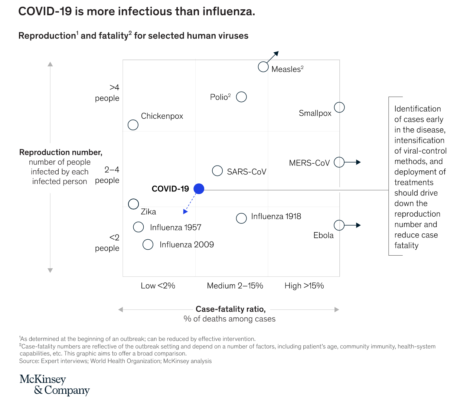 On 9. March 2020, McKinsey & Company published a comparison of the aforementioned disease outbreaks to classify the severity of Covid-19.

As the graph indicates, the average number of individuals infected from each person that is positively tested by COVID-19 amounts to 2-4 (medium), while the case-fatality-ratio totals to less than 2% globally. In comparison, the MERS-Cov is less contagious, however, more lethal.

The spread of COVID-19 in the Middle East

As per AlJazeera, 18 days after the UAE reported their first confirmed case of COVID-19 on 1 February, Iran confirmed two deaths from the virus on 19 February. The wide impact of coronavirus infections in the Islamic Republic is assumed to be the country of origin for the vast containment of about 9,700 travelers in the Gulf region. Proof followed only two days after the first deaths in Iran, five more countries, among them Lebanon, announced confirmed cases. In response, Tedros Adhanom Ghebreyesus the Director-General of the World Health Organisation stated, “The cases that we see in the rest of the world, although the numbers are small, […] it’s very worrisome” 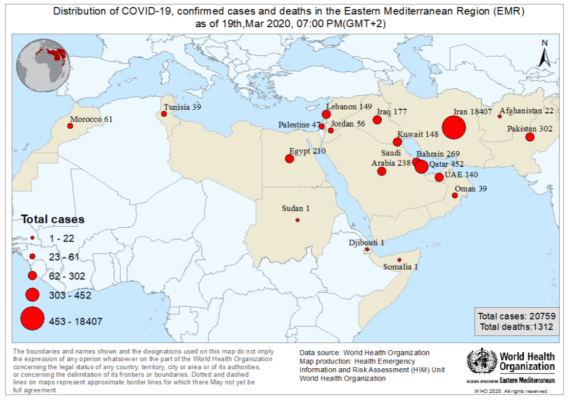 The reason for the rapid increase in confirmed cases lies in the routine business trips between Iran and China. Hence, the viral spread was only a matter of time, particularly because these trips continued without restrictions, according to the Iran Human Rights Monitorcausing a heavy blow to Iranian public health. Similarly, Iran missed the opportunity to prepare appropriately. Combined with the lack of specifically designated medical centers and hospitals for coronavirus infected patients, Iran has experienced a shortage of masks and disinfectants for the public transport sector aggravating the risk of infection.

The close connection to neighboring GCC states together with the frequent movement of persons and materials across borders raise concern for outbreaks to be of similar severity. To determine the latter, it is necessary to draw some conclusions from Iran’s current situation. In this context, McKinsey & Company published on 25 March its latest report on the Global Health and crisis response to COVID-19 providing the most recent overview of Iran.

Iran´s current circumstances include two additional fatal aspects. Firstly, Iran has a large number of unreported infections making it difficult to control the virus. Secondly, the high mortality rate correlates with the age of those infected. Consequently, it is crucial to protect the elderly generation. In the case of the Islamic Republic, there have already been 4 deaths among council and cabinet members recording an average age of 70 years, as of 9 March.

After discussing past outbreaks in the middle east and the origins of the current spread in the Arabic Peninsula, the next article of the “GCC and the Covid-19 Crisis” series will focus on the governmental response, failures in the healthcare system of GCC member states as the containment heightens and the pandemic continues.